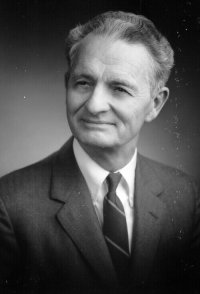 I was surfing the web this morning when I came across the webpage of Geargetown Baptist Church near Washington D.C. I am familiar with this church because my great Uncle, Rev. Paul Merritts pastored there years ago. Here is the post from the GBC webpage,
Rev Paul L. Merritts begin ministering to the Georgetown Baptist Church on Aug 27, 1967. Rev. Merritts served the church even though he still served as a teacher in North Carolina. Rev Merritts was officially installed as the full time pastor of the church on March 24, 1968. Prior to his service to the Georgetown Baptist, he had served as a pastor to the Providence Baptist Church in NC, Salem Baptist Church, Enon Chapel Baptist Church, Surf City Baptist Church. After Rev Merritts left the Georgetown Baptist Church, he returned to Sneads Ferry, NC where he became an active member of the Salem Baptist Church. Rev. Merritts went to be with the Lord on May 27, 2000.
“Uncle Paul”, as I called him, was a very simple man. So much so that I, as a young man would get a bit irritated at him at times. He would never buy new clothes! I never remember him wearing anything newer than an old, worn out Fedora and Tweed jacket which looked as if they were borrowed from old railroad hobo. Some in my family would buy him a nice, new jacket to preach in but we would never see him wear it. Frustrating I tell you!
The same could be said about his home. The house in which he and Aunt Helen lived was very modest; a little two bedroom “starter home” that had no bells or whistles at all. The most interesting aspects of the house were random letters from young couples that he had helped, either financially or through shared wisdom. If you looked closely, maybe on the refrigerator door or the table near the coffee maker, you’d see short articles he had cut out from Christian magazines or a funny anecdote he found in the Reader’s Digest.
From all outward appearances he appeared to be someone you wouldn’t give much credence to, if any, not like many pastors who dress in the latest and most expensive fashions. Much unlike many who pay top dollar for the hippest hair cut and walks with the charisma of a peacock!
Uncle Paul had developed an interesting whistle, not a whistle like most of us are familiar with, not a Bing Crosby, smooth and mellow type of whistle, but a whistle he produced through his teeth, never moving his lips! As a matter of fact, he could whistle in front of you and you’d never know it was coming from him! Coupled with the unique whistle was a permanently squinted left eye. I’m not sure why it was like that, other than his reasoning, “I looked at too many airplanes when I was young; we didn’t see many back then and I suppose the sun gave me a permanent squint!” Seriously, if the average person met my Uncle Paul on the street they would be looking for the “Will work for food” sign! This was the man I got to know; he was just a simple man.
I must rewind for a moment. I was just starting high school when Uncle Paul was in town and dropped by to see us. Out of the blue he told me he wanted to pay my way to Bible College in Philadelphia, PA.! I thought, “Have you lost your mind? Why would I want to go to Bible College?!” Little did I know …! I suppose he had been praying that I would be used in the ministry and he wanted to be part of that. I should have taken him up on his offer.
Fast forward to his later years… It wasn’t until Uncle Paul was much older that I began to understand the depth and breadth of his ministry. When I was called to my first church, New Hope Baptist in Leland, NC, there was a little lady whose husband had been the pastor there before he died. She discovered that Paul Merritts was my great uncle and began telling me stories about how many churches he had planted all over southeast NC. I was astonished! It was then that I discovered that he had pastored Georgetown Baptist church. I was shown a newspaper article of President elect George Bush Sr. standing with Uncle Paul and Billy Graham at GBC. Several Senators were members there and Billy Graham preached that day. Let’s face it, that’s some pretty big hob nobbin’! Most pastors would highlight that on their résumés! But not Uncle Paul…he never even told me about it! Uncle Paul was a simple man who served a glorious God! His purpose was not to glorify himself…it was to glorify God.
This simple man served God with great intensity and selflessness until the day he died…ultimately giving all his money away, whether it was to build a Men’s Dorm at Clearwater Christian College (Merritts Hall), or helping others who were needy. I am now beginning to understand why he was the way he was. His heart and mind were fixed on the Lord Jesus! His goal was to point people to Christ’s glory, not his own! HE GOT IT! This simple man was simple on/with purpose!
I was privileged to preach Uncle Paul’s funeral in May of 2000. I didn’t deserve to preach his funeral; I didn’t deserve to be his great nephew; I didn’t deserve to even know him, but I am extremely grateful for God’s grace and providence in allowing me to know him. I pray I will have the mind of my Great uncle Paul! I pray that I will have the glory of God as my ultimate goal in life…allowing all else to be secondary, I pray that I will indeed be a simple man…
Matthew 23:12 – For whoever exalts himself will be humbled, and whoever humbles himself will be exalted.

3 thoughts on “Being Faithful…”