Looking beyond the physical crucifixion

Posted on March 28, 2013 by joeycanady
Once again we approach the day designated to celebrate the sacrificial death of Jesus on a cross.  Obviously, and with great reason there is much anticipation, joy, sorrow, and a plethora of other emotions around the thought of the crucifixion of the Christ.  These emotions run the gamut, from disgust at the thought of the bloodshed and carnage of the actual process of crucifixion and the assertion that God the Father not only allowed this to happen, but willed it and took pleasure/delight in it, to feelings of glorious and overwhelming heights of humbleness that the King of glory would take the wrath of His Father in our place.
My purpose today is not focused on debating my way into the hearts and minds of non-believers, that’s God’s place; rather I simply desire to cause believers to delve into the crucifixion of Jesus a bit further, beyond the physical into the spiritual.

Many pastors, including myself have spent many pulpit hours striving to describe the horror of the crucifixion, at least from a physical standpoint.  Most of us do that so our hearers will better understand the suffering that our Lord endured to please His Father and redeem his church.  I certainly do not regret those many hours proclaiming the great physical price of Christ’s suffering, but my desire is that the church will look even further into His death.  What really happened during those six hours?  Was the suffering physical alone and was the physical aspect of His death the crux of the sacrifice?

Everything about crucifixion was designed for maximum pain and each step leading up to the cross was designed to build on the previous steps.  It was so gruesome the Bible says it was difficult to recognize Jesus as a human,
As many were astonished at you—
chis appearance was so marred, beyond human semblance,
and his form beyond that of the children of mankind—
(Isaiah 52:14, ESV)
Could there be anything worse than this?  What, if anything could trump his physical suffering?  I believe the “spiritual” suffering of Jesus, leading up to and while on the cross was even grimmer than his physical suffering.  Consider these two things, while on the cross Jesus endured the weight of the sin of the world, and in some super-natural fashion God the Son and God the Father were separated.
First, strive to imagine the weight of the sin of the world,
All we like sheep have gone astray; we have turned—every one—to his own way; and the LORD has laid on him the iniquity of us all.
(Isaiah 53:6, ESV)
I can’t even bear the weight of my own individual sin!  One sin weighs upon me in unspeakable ways!  That’s ONE sin at ONE time!  Try to conceive all of your sin, the guilt and shame from it being placed upon you at one time!  As difficult as that is, think about Jesus on the cross…He bore the sins of us all…at one time, those before us, those living now, and those in the future.  This is mind-boggling!  How could He do it?  We cannot fathom this, for it is indeed super-natural.   Yes, it is super-natural but it is real!  But it gets even more mind-boggling!
Scripture quotes Jesus from the cross,
And about the ninth hour Jesus cried out with a loud voice, saying, “Eli, Eli, lema sabachthani?” that is, “My God, my God, why have you forsaken me?”
(Matthew 27:46, ESV)
What on Earth, or should I say in Heaven is going on here?  How could the Father “forsake” the Son?  There’s never been and there never will be a more intimate relationship than the one between God the Father and God the Son.  That relationship is on display throughout Scripture, but I think especially in John 17.  So how/why would the Father “forsake” His Son?  I believe it’s because of our sin which was placed upon him,
For our sake he made him to be sin who knew no sin, so that in him we might become the righteousness of God.
(2 Corinthians 5:21, ESV)
This had to happen in order for those who would believe to be justified and made righteous, for the Father cannot entertain sin.  So when Jesus “became sin” his Father had to, in some way that is beyond us, turn His back on His Son!  This is nothing short of astonishing!   What could cause more suffering to God the Son than God the Father turning His back on him?!?!?
Ponder on these things as we once again mourn and celebrate this most startling day…Good Friday!  Soli Deo Gloria! 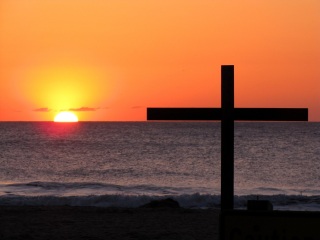